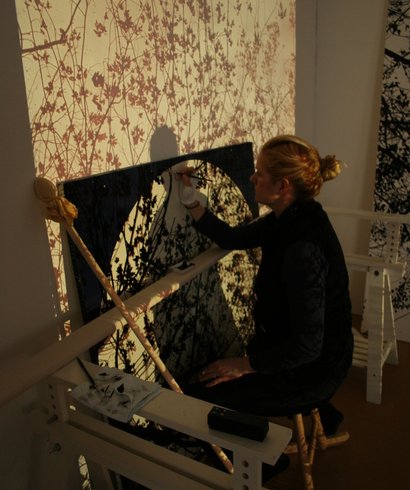 Sue Arrowsmith (b. 1968, Manchester) has exhibited widely in the UK and Europe since graduating from Goldsmiths College, London in 1990 with a BA Hons Textiles degree. She was a prize-winner in both the John Moores Liverpool Exhibition 20 in 1997 and the Natwest Art Prize, London in 1998, and in 2010 was Artist in Residence at the Josef and Anni Albers Foundation, Connecticut, USA. She lives and works in London.

May 2016 she travelled to Meissen Porcelain in Germany to paint a limited edition number of vases for South London Gallery editions.

In 2016, she had her first solo show in Switzerland 'Waiting for the moon' at Galerie Andres Thalmann, Zurich, 18 November - 14th January 2017

In 2018 'Transference' at Moca London with Mathew Weir and opened her second exhibition with Purdy Hicks Gallery, London - We could dream this night away, 12 April until 7 May.